Continuing this 4-part article series on natural gas conversion, this next piece looks at the economics of gas conversion. You can read part 3 on Natural Gas Conversion Technology here.

So, if the technology is mature and the raw materials to feed the process are plentiful, why don’t we see F-T conversion plants on every street corner?  The simplest answer is we don’t need to.  The graph below, taken from the US Government website https://www.energy.gov shows that the United States started to produce more oil than it imported in early 2014, and it’s simply more cost-efficient for us to procure oil the old-fashioned way. 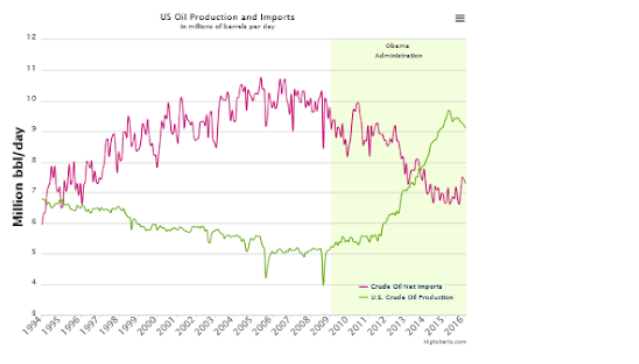 It remains much less expensive to drill, pump and refine crude oil than to create synthetic fuels from other hydrocarbons. As long as the price of crude oil is below some undefined trigger point, synthetic fuel plants will be rare. Note that we mentioned that we could produce F-T ultra-low sulfur diesel fuel at less than the retail price of petroleum based ultra-low sulfur diesel.  However, to be competitive, the production price needs to be competitive with the wholesale, raw production price of the petroleum-based products.

Occasionally, the undefined trigger point is reached and excitement builds in the synthetic fuels industry.  Each time world events create political unrest and the price of crude oil goes up, the number of proposed or planned synthetic fuel plants escalates.  However, by the time the planning, design, and permitting of a new plant is completed, the crisis is over, and the price of oil falls back making the new plants economically unsound.

There are other reasons we don’t have F-T conversion plants across the country.  One, the capital and infrastructure invested in traditional petroleum refining is staggering and not easily abandoned.  The mega-companies that make up the oil industry are resistant to new perhaps, dare I say it, disruptive approaches.  And, small companies don’t have the economies of scale to easily compete in that market.  Another reason is the history of the F-T process itself, being used so effectively by the Nazis in WWII.  It was not, of course, the fault of the process that its first great accomplishment was to fuel what is generally considered the most evil regime in the history of the planet.  Nevertheless, the stain of the Nazis remains and is perpetuated unintentionally by every professor who has ever taught about the F-T process, who dwell on the history and first large-scale use of the technology.

Of course, there will come a day when the world’s oil reserves will be expended, and other sources of energy will need to be developed and exploited.  Perhaps there is some comfort in the knowledge that as that day approaches, there already exists a technology that can convert less useful hydrocarbons into more useful forms; trash into treasure in a sense.  BLEST is already involved with a project to convert municipal solid waste into F-T fuels with the expectation that 1,000 tons of high-grade synthetic fuels will be produced daily, consuming materials that would otherwise go to the local landfill.  Trash into treasure, indeed.

In theory, if all our fuel came from F-T conversion plants, we would have overall better environmental outcomes from our fuel production because of the absence of drilling, fracking, and refining of crude oil and the environmental outcomes associated with them. BLEST is therefore proud to be a part of these projects and hopes to assist industry leaders in fostering this type of process and technology throughout the future.